Given the Bhartiya Janata Party's (BJP) assertive bid for power in the State for the first time in its history, it was thought that the political fight in West Bengal would be the fiercest of the five states where assembly elections were held in March-April 2021. Until 2014, the BJP had been a minor player in Bengal politics, contesting the Lok Sabha elections as a minor ally of the Trinamool Congress in 1998, 1999 and 2004.

TMC president Mamata Banerjee, on the other hand, favored the Congress to the BJP as the party's ally in Assembly elections such as those held in 2001 and 2006. When the TMC eventually defeated the Communist Party of India (Marxist)-led Left Front in an alliance with the Congress in the 2011 assembly elections, the BJP plowed a solitary trough, garnering just 4.1 percent of the vote in 2011 and 10.3 percent in 2016.
Source: Election Commission of India. Vote share and no of seats of others have not shown in the table. On Dec 29,2020 in The Hindu Mr. Prasenjit Bose stated that since 2016, the Bhartiya Janata Party (BJP) has increased its vote share at the expense of the Left Front in every by-election in West Bengal. This change in support from the Left to the BJP peaked in the 2019 Lok Sabha election, when the BJP won 18 of the State's 42 seats. The BJP's vote share increased from around 10% in 2016 to over 40% in 2019, while the Left Front's vote share decreased from 27% to 7.5%, the Congress’s vote share declining by nearly 7%, and the All-India Trinamool Congress (TMC’s) by about 2%. An informal basis created the grass-roots slogan “agey Ram porey Bam (First Ram, then Left)” gripped the masses in absolute figures, over 1 crore voters seem to have moved from the Left Front to the BJP during the period between 2016 and 2019.
Three major factors contributed to the BJP's 18 no of parliament seats from West Bengal in 2019 Indian General Election. The TMC was initially chastised for poll abuse during the state's panchayat elections in 2018. Second, in a National election, there seemed to be no credible alternative to the Narendra Modi�led BJP. The Opposition parties were split at the state and federal levels between regional powers, the Congress-led opposition, and others.
The BJP has made every effort to win the 2021 assembly election, owing to the sharp tendency (40 percent) of vote share in the 2019 Lok Sabha election. The BJP's workers (karkartaas), pracharaks, and volunteers worked tirelessly with the community (particularly with the SC/ST community and Hindus) to bring the party to power, but their strategy failed, and their efforts in West Bengal backfired. The following are the reasons:

1. West Bengal is a border state with a population of nearly 10 crore people, with 27 percent of the population belonging to the Muslim minority (24, 654, 825), 0.72 percent to Christians (858.618), 0.07 percent to Sikh (63.523), and the remaining 70.54 percent to the Hindu (64,385,546) majority community. (Census 2011). Both parties attempted to polarize the vote based on faith and caste, but due to West Bengal's deep community cohesion, one cannot divide the community along religion, caste, and greed lines, rich and poor, or any other social stratification. When you visit West Bengal, unlike other Hindi-speaking states in our country, you will not be asked about your faith, caste, or sub caste.

2. Bengal's rich culture, where most of the social change occurred in the late 18th century, makes it difficult to persuade people to shape opinions or make decisions based solely on social media without sufficient evidence or data.

3. In this election, the Bengal BJPs had no face, and the transition of top political leaders from the TMC to the BJP has resulted in a top-heavy party with a small grass-roots base, resulting in a lack of unity and trust among party workers. Although some top-level leaders were moved from the TMC to the BJP, the majority of their supporters (voters) were not.

4. It also houses millions of post-Partition refugees, the majority of whom are from Scheduled Caste groups such as Rajbangshi and Namasudra. Despite the fact that the BJP has made every attempt to secure their support. The BJP has gained a portion of the vote, but the TMC has retained the other half.

5. Actual BJP party workers felt embarrassed when they saw that the newcomers' leaders from TMC's (148/294 candidates who came from TMC background) were provided assembly seats while their grassroots committed workers who worked so hard to bring the party to this level were ignored.

6. Despite the Prime Minister's ability to effectively communicate with people, his communication is always very impressive, and he is a charismatic and powerful leader, his speeches this time failed to motivate West Bengal voters, especially Muslim’s women and general women, to vote in favour of the BJP.

7. BJP leaders' speeches, by Mr. Amit Shah, Mr. J.P. Nadda, Mr. Yogi Adityanath, Mr. Dilip Ghosh, Mr. Rahul Sinha, Mr. Sayantan Basu, Mr. Suvendu Adhikari and others on love jihad, women's security, culture of the West Bengal and criticizing Ms. Mamata Banerjee, were not well received by the people in West Bengal, and instead backfired. Ms. Mamata Banerjee, on the other hand, has benefited from her clean and street fighter image in terms of gaining votes. Ms. Mamata Banerjee was also able to unite the majority of female voters, and women in West Bengal felt inspired and empowered as a result of her efforts.

8. The TMC Government's 64 social security schemes, such as Kanyashree, Swabuj Satthi, old age pension, widow pension and others, were well received and helped to bring West Bengal's middle and lower middle classes together. Swasta Sathi (Health Insurance Scheme) and Duyara Sarkar were brilliant ideas that were well-received by Bengalis and helped to mitigate the negative effects of incumbent of the TMC Government.

9. The professional work of the PKs and his team has facilitated TMC in selecting the best candidates for the election, as well as understanding local problems and developing counterstrategies.

10. The TMC's slogans of Bangla nigar maya kae chai (Bengal needs her own daughter) and khela hoba (we’re not afraid to fight till the end) have overshadowed the BJP's slogans of Asoal partivan (Actual Change/ Reform), Jai Sri Ram, and Aar nai annay (No more oppression), Sonar Bangla (back to Golden era of Bengal).

11. The Assam precedent on NRC and CAA has frightened West Bengal residents, especially those who have migrated from Bangladesh, to vote for the BJP.

12. TMC was successful in politicking the Election Commission, claiming that the EC is biased in favour of the BJP and that the BJP has unable to counter this.

13. The issue of farmer unrest has harmed the Prime Minister's and Central Government's reputation.

14. In the final three phases of the referendum, voters' minds were affected by concerns about the shortage of oxygen cylinders and the spread of the second stage of the CORONA virus


15. The Congress has indirectly aided or assisted the TMC in its efforts to prevent the BJP from gaining power.

16. The so-called intellectual segment of West Bengal is still overwhelmingly in favour of the TMC or Left Front, with almost no support for the BJP.

17. Although the deployment of the 125 companies of central armed police forces for the state which include Central Reserve Police Force (CRPF), Sashastra Seema Bal (SSB), Central Industrial Security Force (CISF) and the Indo-Tibetan Border Police (ITBP), undoubtedly assisted in the smooth operation of the election process, but they were not adequately trained by the election commission, which caused uncertainty among the public, and the TMC attempted to capitalize on this negative picture. However, they were only able to do so to a limited degree.

18. The state police are under the jurisdiction of the Election Commission during election period, but a significant number of them have backed TMC candidates and representatives.

20. 18 MPs who were elected in the 2019 Lok Sabha election from West Bengal were unable to use their MPLADS fund (Rs 5 crore a year per MP) to address local needs, which would have benefited their party. This was due to the reallocation of all Member of Parliament Local Area Development Scheme or MPLADS funds for the duration of 2020-21 and 2021-22 to the Consolidated Fund of India
I'll leave it up to the reader to determine if the 5 Ms: Modi, Mamata, Mahila (49.01%), Muslim
(27.01%), and Matua (30 million population) factors played a role in the West Bengal assembly election of 2021 or not. Balloting was revoked in two constituencies after andidates fell prey to COVID-19, resulting in approximately 76 percent voter turnout for 292 assembly seats out of 294 total seats in West Bengal's 2021 assembly election. The BJP won 77 assembly seats in 2021, up from three in 2016, and raised their vote share from 10.3 percent in 2016 to a significant 38 percent in 2021, because of their hard work. TMC, on the other hand in the leadership of Ms. Mamata Banerjee, won 213 assembly seats with a vote share of 48 percent, up 2.4 percentage from the 2016 assembly election (though its leader, Ms. Mamata Banerjee, lost the election) and TMC was re-elected for the third consecutive terms. The  Left and the Congress, which dominated West Bengal for decades, would have no representation in  the assembly for the first time. The BJP has a chance to lead West Bengal in 2026 if it performs an honest critical review, develops a proper strategic plan, and works hard at the grassroots level, based on the lessons learned from the assembly election 2021. On the other hand, the TMC government faces a challenge in creating more job opportunities, new industries, and a government free of corruption, as well as implementing the party's manifesto in next five years.
The author is a professor at one of India's top universities. The author's personal experiences and close observations of the election process in West Bengal's 2021 assembly election are the basis for this article.
at May 12, 2021
Email ThisBlogThis!Share to TwitterShare to FacebookShare to Pinterest
Labels: Political 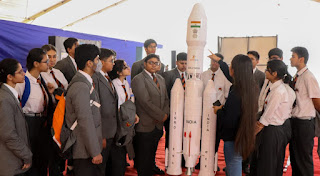